The cocktail party nightmare : how do groups of bats echolocate?

Echolocating bats emit very loud calls and listen for the faint returning echoes to figure out where things are. This works pretty well when they're flying alone, but when in a group things might start to get very tricky. Each bat in a group emits very loud calls about ten times per second. Every bat in the group is also trying to listen for its own (faint) echoes in the midst of all the loud sounds (calls and echoes) from their neighbours.

Even though we think of it as a challenging situation (the cocktail party nightmare), many bat species don't seem to be bothered by it. Bats are very social animals and even display impressive feats of group flight as they emerge in the evening or even within the cave itself.

My research seeks to answer how they manage to fly despite the tricky sensory conditions. I use computational sensory modelling along with experimental observations with video-acoustic tracking to quantify the sensory inputs a bat in a group might be receiving. In a recent paper we showed that even though echolocation does get harder with increasing group sizes, bats may still be detecting at least one echo per call. I also performed video and acoustic tracking of bats as they echolocated in their caves. While the hardware technology to do this has been in place for some time now, it's only recently that the signal-processing and tracking methods are coming into place. I'm looking forward to analyse the one-of-a-kind dataset of which the GIF above is just a tiny part of!

Most spiders are actually very asocial. If you were to put two spiders in a box, at the end of the day you'd typicallly have just one of them alive. In contrast to the 'classic' spider way of doing things, there are just about 40 species of spiders that are positively social. Two social spiders in a box will actually end up in the same corner at the end of the day. As a result of their sociality social spiders can do many things a typical solitary spider cannot. A nice example is that social spiders can build huge webs, or capture prey much larger than they would be able to alone. 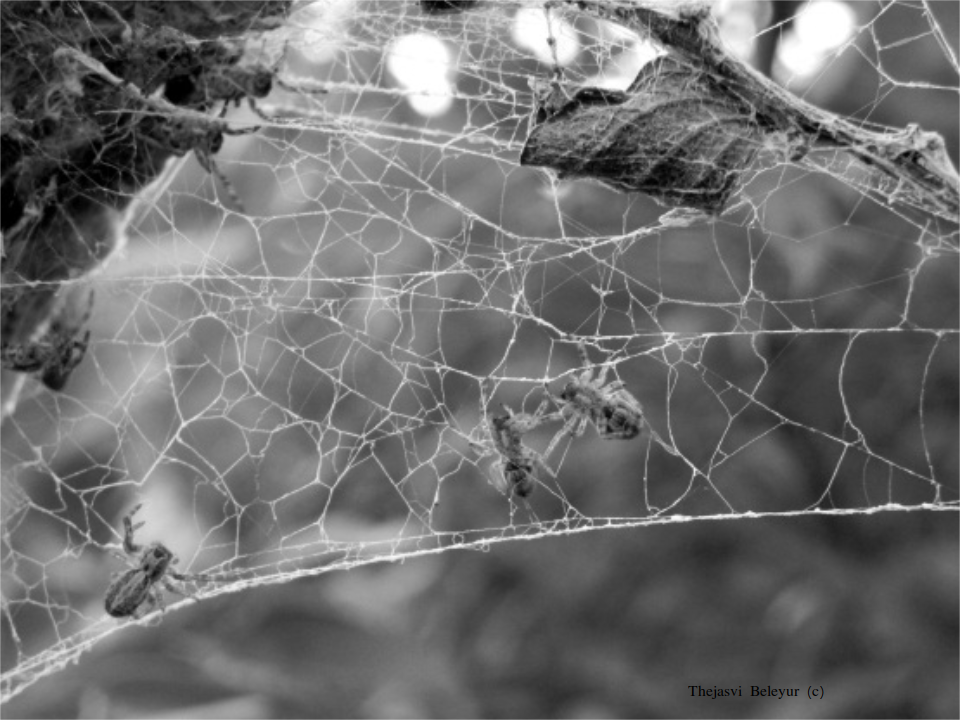 Despite their coolness as spiders, they have been relatively under-studied. For instance, even though they live in groups, it wasn't quite clear if social spider groups individuals were task specialised, as in some honey bee and ant species. Moreover, all spiders in a group look the same. We looked at whether there was individual propensities to capture prey and participate in web maintenance and building and saw that there were indeed spiders that consistently participated more in prey-capture, but that this could be modulated by hunger-levels. Later on, I was part of an inter-disciplinary team that looked at how social spider webs develop over time.

Plant phyllotaxis: where do leaves end up growing?

Plant leaves and flowers can be arranged in very cool patterns. A really nice intricate pattern is the romanesco broccoli. This pattern of leaf/stem placement in a plant is called phyllotaxis. These patterns have of course fascinated many people over the past few centuries, and more recently experimental and computational work has shown that new leaves begin to grow wherever plant hormones, called auxins accumulate. This was my first encounter with hands-on computational modelling. Of course, my own modelling didn't work out so well back then, but I was lucky enough to contribute to a review paper on the recent methods and results in the experimental and computational fields of phyllotaxis.